Mutation, Misinformation and the Marvelous Mütter Museum: Not a Children’s book by Emmi


It is one of my absolute favorite times of year. I love the (stipulation: rare) stunningly clear and distinctly scented autumn days, I love the sweaters, I love the flavors of fall – the pumpkin, the sage, the maple syrup, the late blackberries. I love the way, even in the miserable, soggy, grim expanse of the pacific northwest, that subtle blush of color spreads over the leaves until all the trees blaze out in a defiance of crimson.
And I love the fall fashions. I get excited every year to see what new trends emerge. This year, there doesn’t seem to be much novelty in vogue, which has been really, really disappointing. Much like last year, we are still seeing a preponderant focus on ADD, ADHD, Asperger's, and bitching about the flu shot.
Oh heavens, I’m sorry. Did you think I was about to talk about clothing? If you want my sartorial critiques you are just going to have to wait until spring, when I’m good and donked up on vino verde and someone gives the Olsen twins another slab of stock in Walmart. Until then, I’m going to stick to sarcasm directed towards issues more directly in my wheelhouse, though admittedly those issues are pretty much confined to “bottles of wine that cost less than 10$.” But it’s my favorite season, google keeps sending maniacs to this blog, some people just had shoulder surgery, and anyway I’m hoping to post a little more frequently this term, as It has become far more imperative that I avoid any actual work. There’s also the small matter of needing to step up my game after I accidently promised to marry everyone I meet on the internet.  I’m inspired!
So God damn, could we just move on to something innovative in our disease crazes? For years, we have been over-diagnosing and carping about the same old shit. Remember when suddenly everyone had depression? And now everyone has ADD? For god’s sake, everyone had Attention Deficit Disorder when I was a kid, and it’s been completely played out for years. For awhile, I really thought that the grand obsession with the Autism spectrum was going to help guide our focus in a new and truly avant-garde direction. But, no. Alas. I don’t exactly know who decides these things, but please just get a grip. It is way past time to move on. These guys are sticking like denim when they should have been jeggings. Let’s be real.
Every year holds the promise of a new arena of pathology, and every year I’m held back by a redundant deluge of the several million examples of why we should probably declare Jenny McCarthy’s asinine twitter feed a public health emergency. This year, I was so sure that things were going to be different. Firstly, we sequenced the BLACK PLAGUE. THE BLACK FUCKING PLAGUE, Y’ALL. And then we found out that the black plague AINT SHIT! How Badass is that?! Like, if the black plague were to come back, our immune systems wouldn’t even give a fuck! Our immune systems would give the black plague the kind of scornful once over that gets directed towards a fat girl who wore the same dress as you to a party. “Oh,” our immune systems would say. “I didn’t know you were coming.” As an aside, our immune systems would turn to our nervous system and whisper something about how they just let anyone in, these days. Daaaaaaaamn.
Secondly, popular culture has given a big boost to those of us in the health services by making epidemiology really, really sexy.

Remember how lame Dustin Hoffman was in Outbreak? 2011 won’t stand for that! The bathrooms in movie theaters after Contagion lets out are filled with people washing their hands more thoroughly and self consciously than ever before.
I realize that it’s really difficult to establish a cultural trend of conditions that are at baseline binary – I mean, you either have tuberculosis or you don’t. But there are so, so, so many disorders that fall somewhere on a diagnostic spectrum; couldn’t we just give one or two of those a chance to get crammed all the hell the way down the throats of people until we’re so goddamn sick of them we could just die? Like Trichotillomania, or Histrionic personality disorder, or Anemia? Obsessive Compulsive Disorder looked to be making a comeback, but much like overalls, that movement fizzled out in a hiss of Jack Nicholson.  I think we’re doing a massive disservice to a huge component of the population by failing to acknowledge that pestilence, plague, and the vast and colorful spectrum of viral and bacterial infections are relevant and often integral parts of many lives. Maybe we could start a movement encouraging increased sensitivity? Who exactly decided that whole populations are suffering from a disadvantage as opposed to an alternative lifestyle? I’ll be the first to acknowledge that I don’t always remember to refer to some individuals as “differently-eased.”
I know that some of you will be skeptical. “What’s next?” You’ll ask. I’ll probably ignore you. Considering that the slippery slope argument inevitably ends in the mass extinction of a vulnerable population or sex with dogs, I try to use it sparingly if at all. I can only take so much.
On that note, Let’s talk about pathology as a pastime. The Mütter museum in Philadelphia is a warped wonderland of deformity and bizarre affliction.
A monument to morbidity, the museum is in fact beautiful, gleaming mahogany and burnished wood cases housing row upon row of grinning, alarmingly imperfect skulls behind spotless glass. 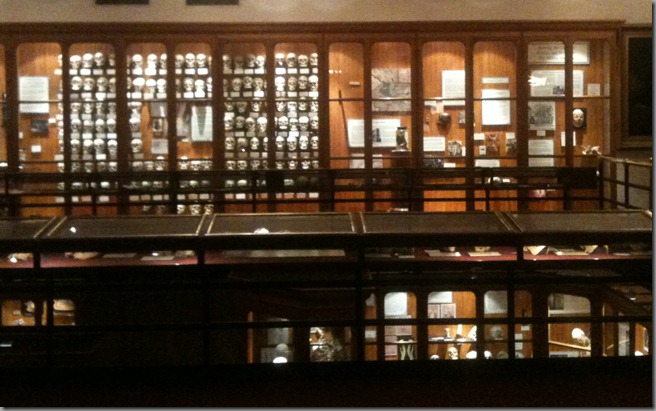 In a concession to modern sensibilities, there is a half assed exhibit at the very beginning of the museum dedicated to medical forensics, civil war wounds, and forensic anthropology. 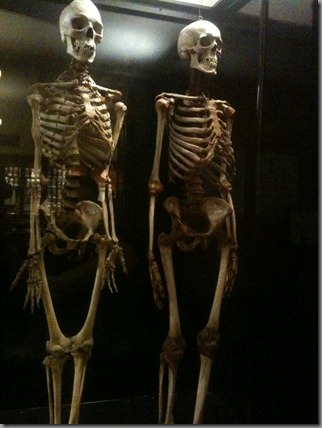 one of these was a lady.
It doesn’t take long to get to the good stuff, though; Some broad that turned into soap and an entire case of surprising things that grew out of various sites generally considered unpopular or insalubrious for things to grow! 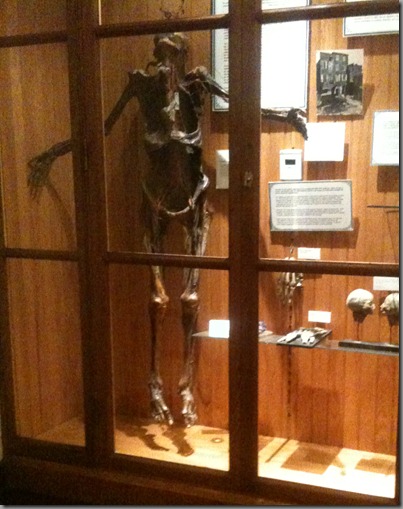 The museum itself is a part of the Philadelphia College of Physicians, which, founded in 1787 boasts the oldest doctors in America. (Some details fuzzy.) The museum metastasized from a collection of curiosities donated by Dr. Thomas Mütter in 1858, and quickly became a repository for all the screwed up things people secretly want to look at but need some thinly veiled educational veneer as an excuse. 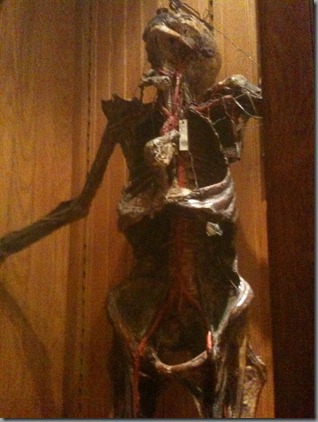 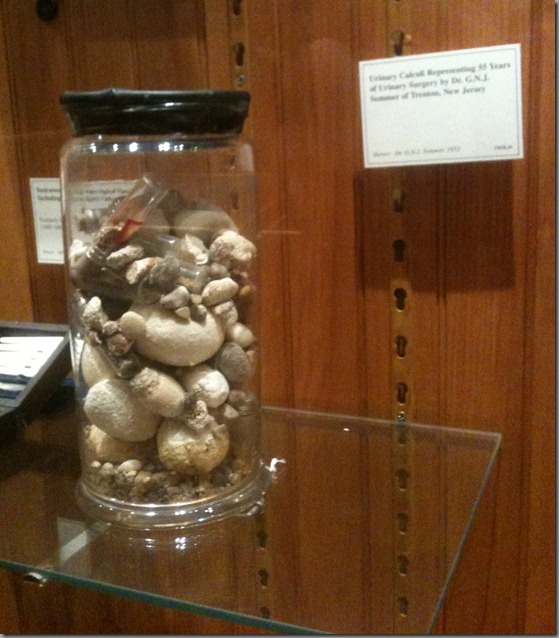 the sign reads: “I have been digging this shit out of urethras for 35 FUCKING YEARS and putting it in jars. You can judge but please remember you paid to look at this.” 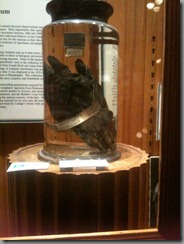 That sign says, “I kept this monster hand in a jar so that next century, all you little bitches who can buy hand sanitizer in the express line at Old Navy and know how to defecate remotely can wrap your sterile little minds around what Gangrene looked like.”


One of my favorite exhibits was this exquisitely articulated skeleton. The bones are twisted and feathery, the joints eroded by strain and friction. As a piece of art, it’s breathtaking. As a monument to the freakish potential for human suffering, it’s heartbreaking. 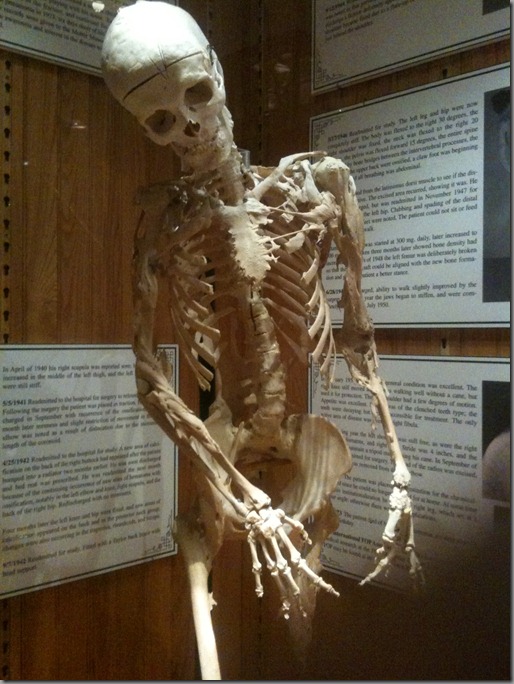 This exhibit below was way more fun, because it is the direct result of the fascinating and limitless extent of human imbecility. 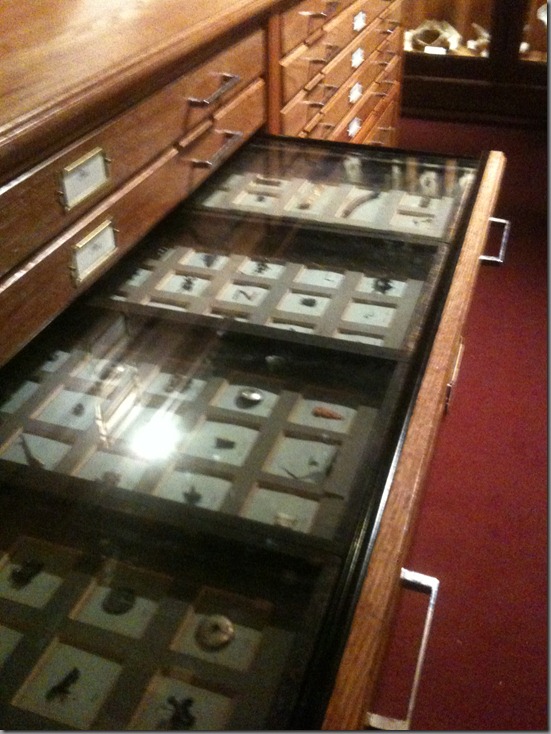 There are 32 drawers in this cabinet, and each one of them is filled completely with the staggering array of fatuous things that people have somehow choked to death on.  All the usual suspects, like buttons, small bones, marbles, sanctimony and excessive cologne are all represented, but some of this shit is insane. Why would you put fishing lures in your mouth? Why? WHY????! I can only conclude that there are numerous people who have just got the concept of fishing completely ass backwards in the most pathetic and tragic way possible. 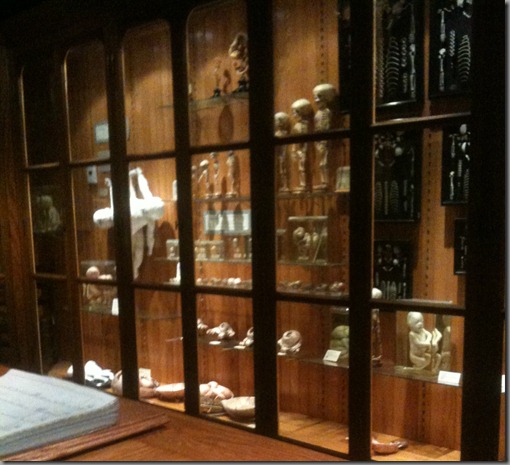 One of the specialties of the museum is abnormal births, and there is an entire wall dedicated to portraits and biographies of Siamese twins, jars of conjoined fetuses, and in one central isolated case, the embalmed body of conjoined brothers who lived into old age, acquiring separate farms, and wives, and lives that they took turns living weekly.
The museum may seem grotesque, exploitative, morbid, deranged. But the subjects are preserved lovingly, displayed with respect and deference, and painstakingly cared for.
While it’s true that I was fascinated by some, and repelled by others, and while it’s clear that the point of the museum is to cater to that slightly unhinged, gruesome obsession we have cultivated with the alien and the dead, there’s something to be said for how humbling it feels to stand in front of the skeleton of a ten foot tall woman, and wonder what your life would be like if you were defined by an aberration so extreme you could never hope for an interaction that was not somehow colored by it.
And there’s something to be said for the kind of miraculous transformation that can bring us face to face with the freaks and the feared, the sideshow mutants and the tragic remains of lives lived in pain, and somehow endow the encounter with dignity and intimacy, and leave us with the suspicion that just beyond some numinous boundary, the things we deny are reverently illuminated and monstrously sacred with the strangest beauty. 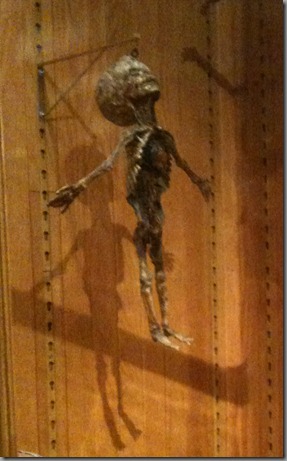 Email ThisBlogThis!Share to TwitterShare to FacebookShare to Pinterest
Labels: actual ethics?, things to do in America, Travel