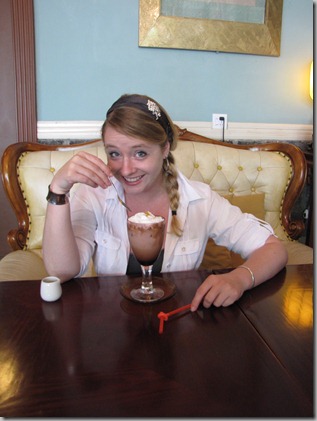 Not all adventures in eating begin when the food arrives. Sometimes, it’s not what you get but HOW you get it that truly makes an experience remarkable.  And often, just trying to order food is more notable than the food itself.
Most cultures have highly varied notions of what individuals find appealing. For example, I have a bun warmer in my kitchen which was probably installed right after the second world war called the “MOIST-CRISP!” Obviously the first point I’d like to make is:
What the hell, y’all?
But secondarily I’d like to point out that that combination of words is not at all appetizing for most people. Presentation is important when serving food, and even more important when it comes to labeling and advertising.  You wouldn’t want to consume a product called the “porous and yeasty,”  which is why we have “Bread.” (In point of fact, bread used to be called “mealy bowel gel” but marketing directors soon found that a name like that dissuaded people from keeping it in their MOIST-CRISP! and so they passed a legislation making it really difficult for inventors to name their own products. This is why it’s taken so long for me to formally offer you a little something I’ve been working on, the “cheddar flavored dump-lube.” Hypocrites.)
China takes these cultural differences into account when making food and drink accessible to its foreign friends. Just as advertisers focus on naming and describing products in a manner evocative of the concepts consumers value most, China often takes the priorities of the target market into account when translating.
From the sublimely optimistic: 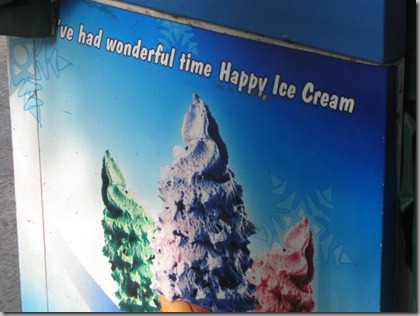 To the things that are better filed under “Harbinger:” 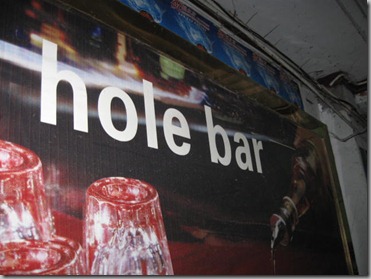 who do you suppose would go here?
Some food related Engrish is constructive. 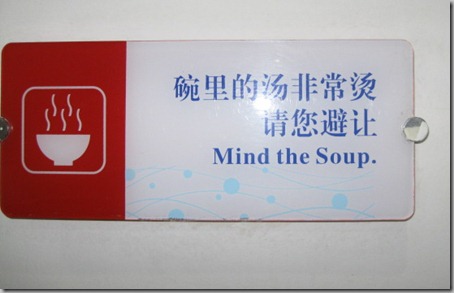 Other instances are just ill conceived. 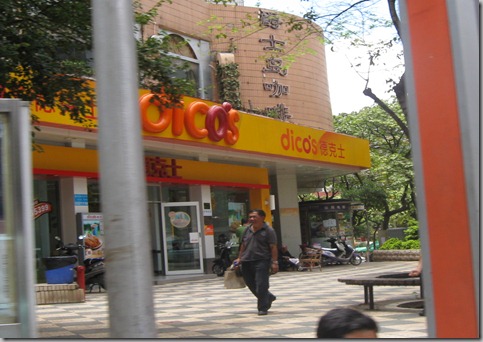 you’ll never guess what they serve at “Dico’s.”
But the menus are what really phone it in. Shanghai prepared for the large anticipated influx of foreigners during the Expo by running all their menus through “google translate.” 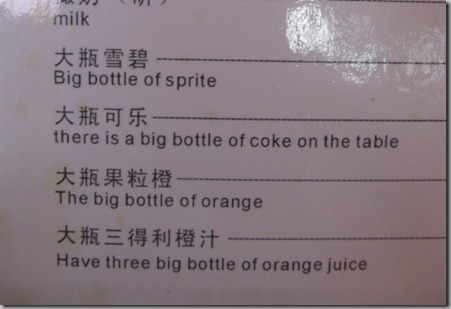 don’t tell me what to do. 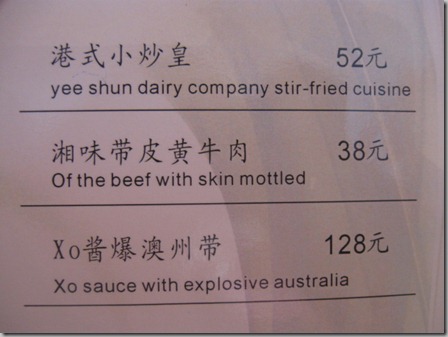 To me, attempting to divine what might actually be meant by a given description is probably by far the best part of the process. Since my brother can both speak and write Chinese, there was a failsafe. But I really enjoyed the deductive reasoning. For example, “Of the beef?” Does that mean “from a cow?” or actually “From the beef?” Is it beef? Is it a beef product? or is it something one might find on beef? Like a parasite? a food-borne pathogen? What kind of beef is this of? “Beef with skin mottled?” That is the least encouraging description of ostensibly edible meat I think I’ve ever read. And this isn’t even a concrete assumption we’re making about whether or not the food in question is beef. We may in fact be ordering a non-beef substance that is simply derived from some alleged beef, such as fat. Or a deer tick. OR E. COLI. WHO SERVES E. COLI IN A RESTAURANT, CHINA?!?!? At least it was an evocative euphemism.
Don’t even get me started on the implications of “explosive Australia.” 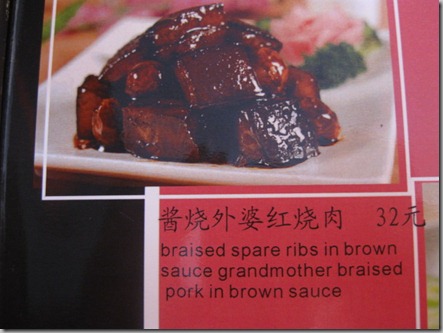 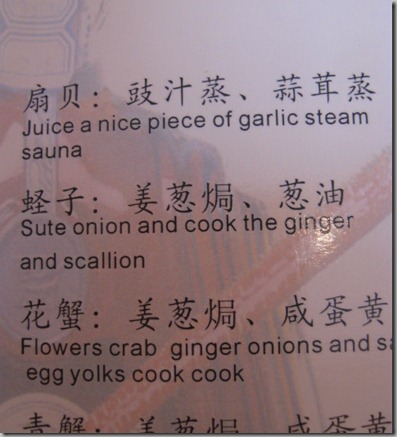 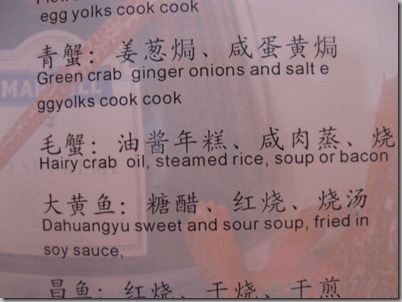 a) What the fuck is hairy crab oil? SUPER PASS.
b) I admit to being a little discomfited by the options they offer. When is the last time you had to choose between soup and bacon? WHAT KIND OF SICK ESTABLISHMENT IS THIS?!
c) How are you even going to fry some soup? 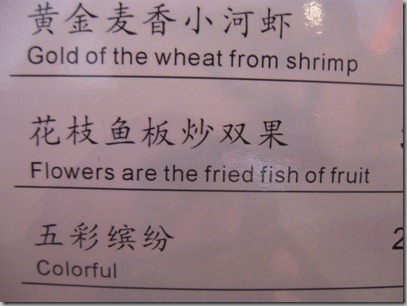 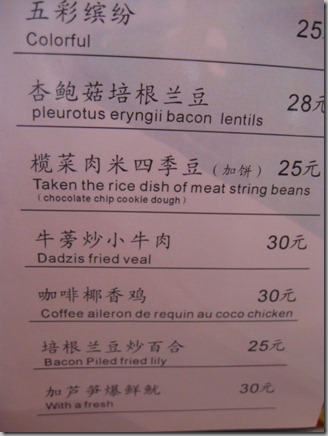 There isn’t a paragraph in the world that could really analyze these options comprehensively, unless I just discovered the secret to speed reading “Finnagan’s Wake.” (Ed. note: I checked; I didn’t.) So I’m just going to attack these in order.
1) Colorful: I’m not even going to guess.
2)pleurotus eryngii bacon lentils:  I can identify exactly two of these words, and the other two sound like the kind of thing you might see printed on a card underneath a picture of a person’s foot fungus or infected surgical incision.
3)Taken the rice dish of meat string beans (chocolate chip cookie dough): Chocolate chip cookie dough? What the fuck kind of rice dish is this? And what is a meat string bean?
4)Dadzi’s fried veal: boooooooooring.
5)coffee aileron de requin au coco chicken: The most comprehensible thing on this menu.
6)Bacon piled fried lily: This is the kind of thing I imagine Kermit the frog having raging night terrors about.
7)With a fresh: For five dollars. With a fresh. A FRESH COSTS FIVE DOLLARS.
WHAT IS A FRESH?!!?!??!?!!?!
WHAT IS IIIIIIIIIIIIIIIIIIIIIIIIIIIIIIIIIIIIIIIIIIIIIIIT?!??!????? 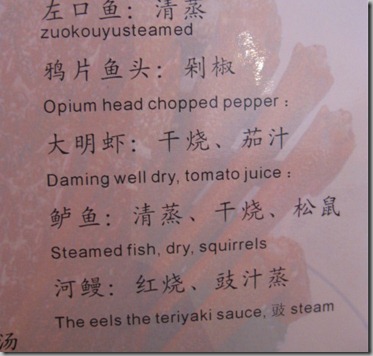 Don’t talk to the tomato juice like that.
Also, is that “dry” intended to be an ingredient in of itself, or is it supposed to be a descriptive modifier for “Squirrels?” Either way. No. No, thank you. 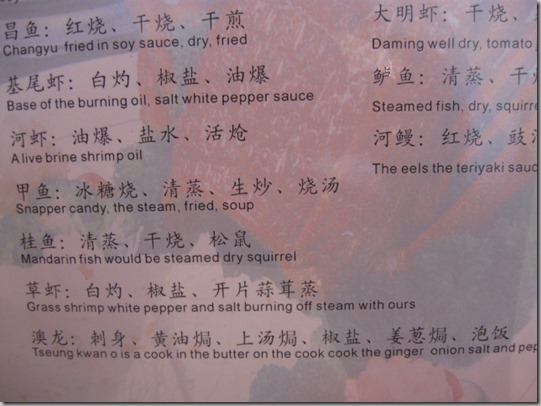 The mandarin fish WOULD have been a steamed dry squirrel, but flowers being the fried fish of fruit, the eels the teriyaki sauce. The moral being, that Tseung Kwan o is a cook in the butter on the cook cook.
Are we clear?
No?
OK, in order: Snapper candy, the steam, fried, soup.
Better now? Alright. 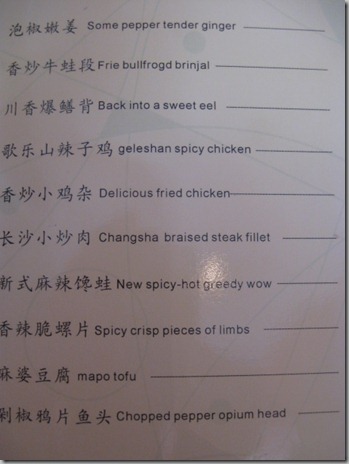 Oh Jesus. Obviously they obtained an advance copy of Snoop Dogg’s new single, “Back into a sweet eel.”
Also, they have that mouth watering special, “Spicy crisp pieces of limbs!”
After viewing this menu, I will never again drive by one of those bozos standing on the street corner waving signs for Stereo Outlet or Mattress Clearance warehouses without imagining that the text of the sign says,
“NEW!! SPICY HOT GREEDY WOW!!!” 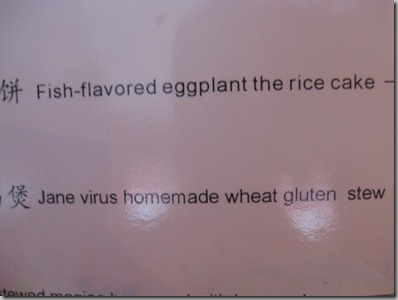 At least it’s homemade. That makes everything more appetizing! 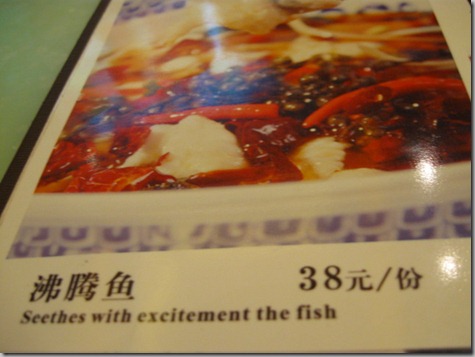 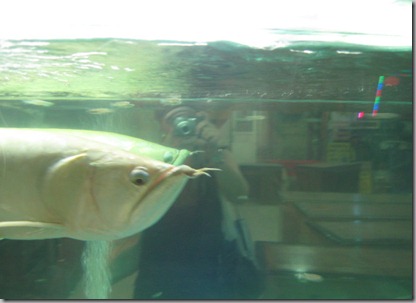 …oh.
Also can I just point out that this fish looks like an emotocon? I invite you all to substitute a picture of this fish for that stupid parenthetical-mawed frowning burlesque perversion of the English language. (Blogs are for people with opinions.)
Perhaps it had enough of the shenanigans of the crab; 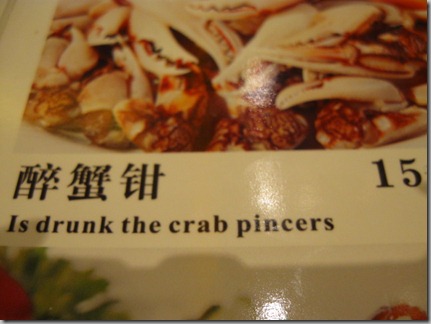 or had one too many run-ins with the samurai salmon. 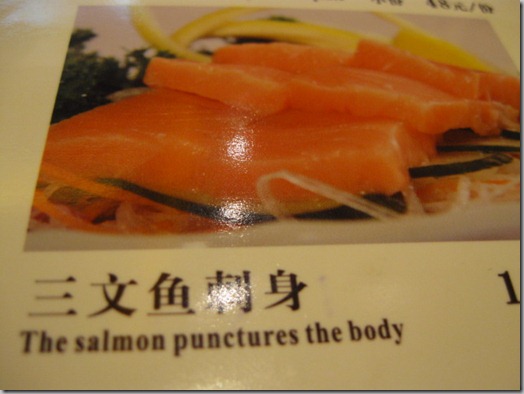 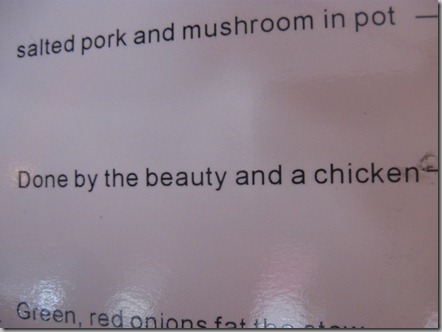 This just sounds like a Tijuana sex show. I don’t even want to know what comes out of the kitchen when you order this. 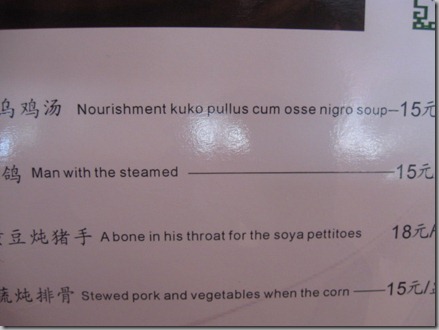 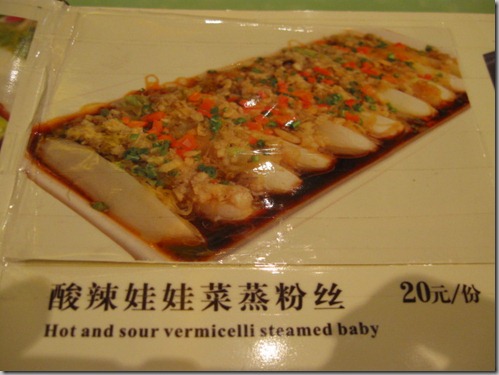 For the love of – ! Not the baby!!
And finally, to end on a more instructive note, 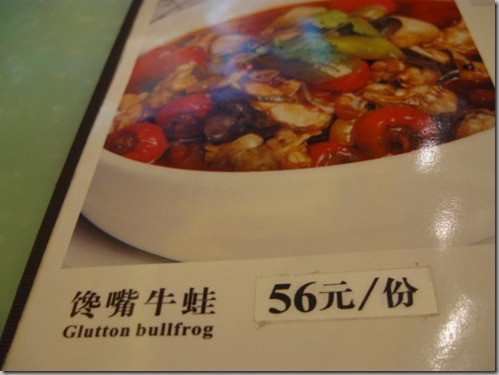 This dish is clearly a parable. Like, the bullfrog was so greedy, he ate way too much. All day long he just sat on his bacon piled fried lily pad and hogged down.  He was such a rapacious bullfrog, the townsfolk (oh, those ubiquitous townsfolk. The underpinnings of every fable. Where would we be without their faceless, mindless panel of homogenous judgment? Thank God I had a spare set at this blog. I don’t usually stock them. There’s sort of a dearth of demand for that kind of thing around here.) were perplexed. They convened at the town hall (I didn’t have a church in my bag of banal literary mainstays, sorry) and decided to kill the bullfrog, sell his bacon piled fried lily, and offer his stewed carcass to the public with a clear description of his crime emblazoned below a photo of his corpse as if THAT WOULD MOTIVATE PEOPLE TO SPEND MONEY ON IT.
Sorry.  I’m not really all that good with unhappy endings.

Email ThisBlogThis!Share to TwitterShare to FacebookShare to Pinterest
Labels: food