I don’t know why it is that every damn place needs some pestilent mosquito choked hole they dub “The Venice of _____?” China is no different.  The “Venice of China” (God Damn it) is Suzhou (Soo – Joe), an ancient (what isn’t?) town about a two hour train ride south of Nanjing.

Away from the water, Suzhou is a twisted maze of dusty back alleys and passageways, crooked doorways heaped with piles of motley fruit, stacks of cages crammed with chickens. A single duck hunches sullenly in a plastic wading pool. 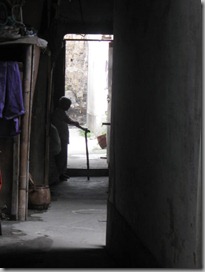 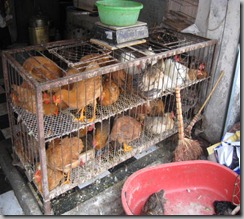 Unlike other Venices of Places, Suzhou actually does possess a network of canals, which meander through historic sections of the city and abut museums and cultural art centers. 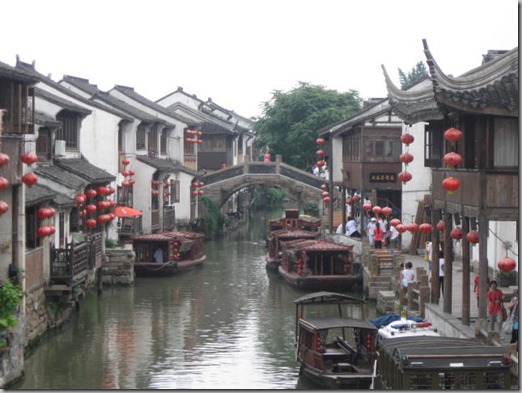 these are mostly places you can spend all your money.

You can take a boat tour through the canals and down the Yangtze River, where the banks are lined with temples, tea houses and gardens.  Our ride was peaceful and lovely. A gentle rain drifted down, casting a cool mist over the heat of the day. The water lapped softly at the sides of the boat. The old woman sitting across from us gazed serenely out the window as the mossy landscape rolled past, and eventually dozed off.

Then they turned on the speakers at full blast for a recording of an audio tour that the owners of the boat had obviously ripped off from another tour company with the subversive use of a tape recorder.

The sound quality was so poor as to render the entire tape unintelligible, and at one point the recording got stuck and began to skip, repeatedly and infuriatingly. On top of the fact that it is completely half assed to steal a guided tour from some other company,  how ridiculously lazy do you have to be to let the damaged tape run on for five minutes while you stare blankly out the window? 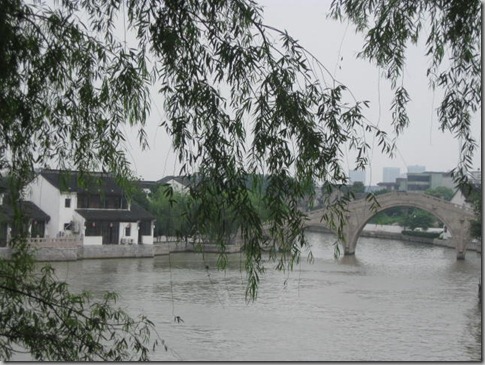 Please imagine this scene set to a deafening cacophony of remixed garbled Chinese.

Situated in a strategic position along the Grand Canal through the Yangtze Delta, Suzhou was an important center of commerce until it suffered the first of its desecrations in 1937, when the invading Japanese troops razed it en route from Shanghai to the former Capital city, during the infamous “Rape of Nanking” in World War II.

The destructive frenzy of the cultural revolution during the Communist regime under Mao Tse Dong further accelerated the demise of Suzhou’s Buddhist temples and monasteries, leaving the city debilitated.

China has since realized the touristic value of structures that are ancient and beautiful, and as a result much of Suzhou, (and similarly, many other cities throughout China) has been rebuilt in the old style. 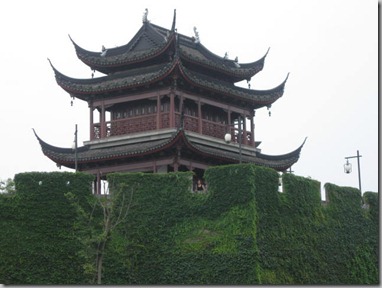 In actual fact, most cities in China that boast the attraction of an “Old Town” have simply rebuilt districts in the manner and image of the areas that were destroyed in the mania of the cultural revolution.  The government imposes numerous building restrictions in areas that have old style buildings or dwellings typical of ethnic minority groups. Anything built in that area must, by law, resemble the other buildings in that area. There are no limitations on what can be built where, however, a lunatic state of moral anarchy that has led to the installment of an Honest to God Starbucks in the Honest to God Forbidden City in Beijing.  I only wish I were kidding.

Suzhou is,  and was, most famous for its canals and its gardens. There are about 50,000 gardens up in that mother and every one of them has some preposterously specific and verbose name. The one we chose to visit was “The garden of the assistant undersecretary of the grand republican minister of agriculture.” Or something. 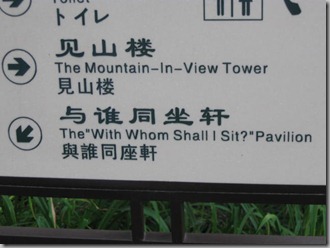 this was next to the “glorious hall of  exactly two hundred mandarin ducks” and the “shelter of anxiety for the quality of your intimate linens” (hint: one of those is not real.)

The gardens were vast and lush, comprehending a stunning collection of plants and fish. The sheer luxury of the place casts severe doubts on the integrity of the aforementioned AUGRMA; who was clearly either an embezzler or an alchemist. 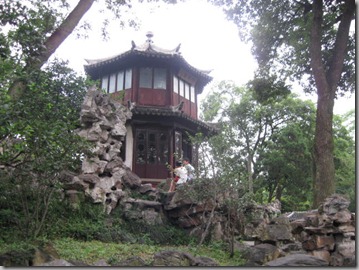 the “gazing at the moon” pavilion, in a miraculous exhibition of rare Chinese brevity.

When the rain started in earnest we found a haven under the wide eaves of a covered walkway and watched the huge drops antagonize the whiskered fish in the koi pond. 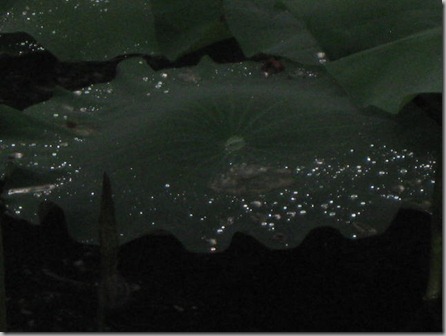 The garden was crowded with tourists, many of whom had somewhere acquired small, high pitched flutes upon which they all, simultaneously, were attempting to shriek out “Mary had a little lamb until I ate every part of it even the rectum and the preons” in conflicting keys and time signatures. Sometimes I am convinced that China has a secret chain of novelty stores called “annoyance world” where people go to buy light up shoes that squeak for their children and the kind of chicken that never, ever, under any circumstances, will shut the hell up. 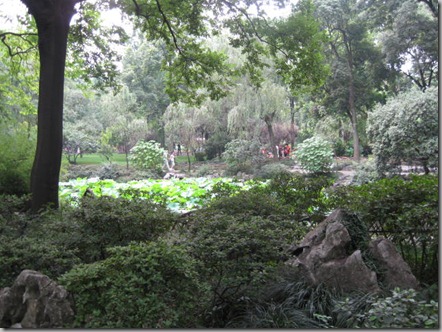 the soundtrack to this picture, if you please, is the noise of a phlegmatic individual hocking an enormous loogie and two wide eyed young xenophobes in squeaky shoes wheezing out “Twinkle twinkle little star” while they regard us with terror.

The rain subsided in time for us to catch the fast train back to Nanjing, which, to my delight, proved to be one of China’s fancy new bullet trains.  My first bullet train! 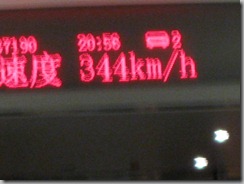 I realize that this picture is horrible and blurry but I absolutely cannot resist posting it. Check out how fast we were going, y’all!

Travel by rail in China is absolutely amazing. tracks are laid all the time, and most of the country is covered by the railway. There are a few notable exceptions,  but overall I’ve been extremely impressed with the efficiency and the ubiquity of the Chinese railway.

I am compelled to point out in closing, however, that I currently happen to be traveling through a region without a significant network of tracks, and have hence been relegated to the “pavilion of narrow seats and unreasonably inadequate shocks” adjacent to the “temple of unpleasant smells and people spitting on the floor even though you have to take off your shoes to walk through the bus to find out that the bathroom is broken which is probably for the best anyhow.”