There are three basic tenets followed when getting dressed in China. 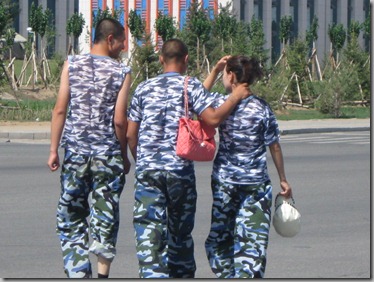 a) two patterns are better. 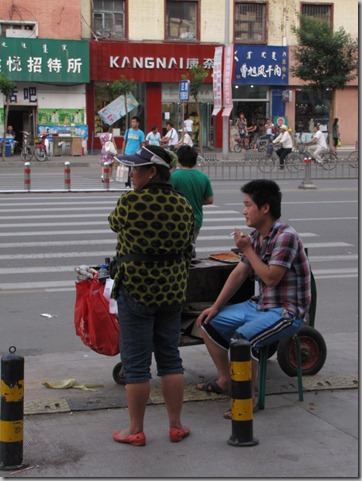 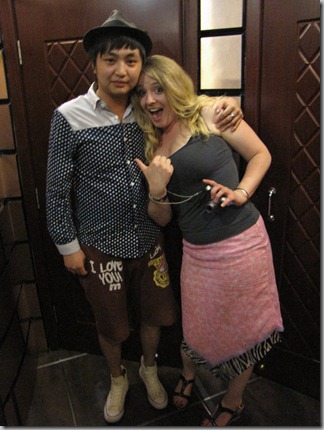 Though, in reality, “matching” is a very important concept to the Chinese.  For the past ten years or so, it has been a popular trend to have couples dress alike. Sometimes this can mean just wearing the same color, but more often this involves the purchase and coordination of an entire “couple’s wardrobe.” An ENORMOUS fashion industry in China (and I cannot exaggerate in trying to describe what a huge thing this is) is the design and production of “Couple’s Shirts.” These shirts are often identical, though more often they are merely similar or deliberately complimentary. Most shopping districts will have at least two or three stores dedicated entirely to matching shirts for couples. 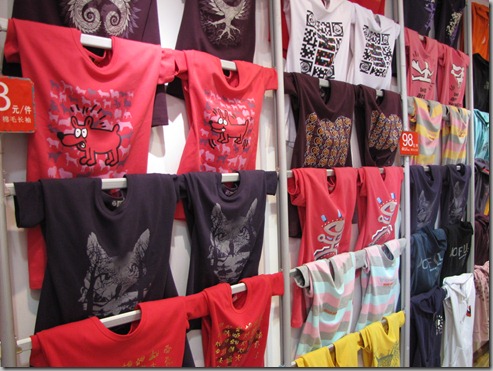 I have mixed feelings about this trend, since it seems to me a little exclusionary, and more than a little proprietary.  And I don’t really relish the idea of having your entire image be centered around the fact that you are in a relationship. 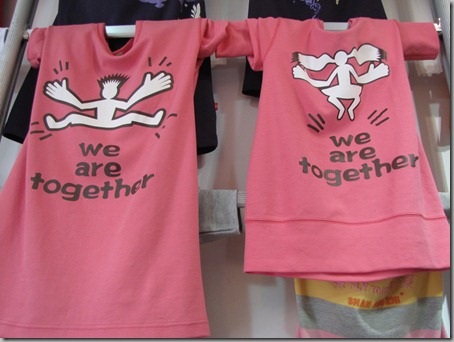 I can just imagine the number of arguments that are precipitated by the prospect of having to coordinate your outfit with your girlfriend every day of your life. However, the store owner I interviewed said that although far more women than men instigate purchase of the shirts, men “can really enjoy” wearing them because “It makes their girlfriends happy.” I’m not sure that goes a hell of a long way towards refuting my point, but she seemed to feel that it was conclusive.

N.B:  More recently, the franchise has been expanded to include a matching onesie or children’s t-shirt for the couple’s offspring.

name brands do not need to be legitimate, accurate, or representative. It is pretty much enough that they be plausibly recognizable. One thing people go crazy for in China is Gucci. Or rather, Chinese people go crazy for the letters G U C C I. They don’t even need to be in that order. One particular popular fabric simply has the letters printed in asymmetrical stripes indiscriminately across the shirt, forming line upon line of fashionable, mutant DNA. 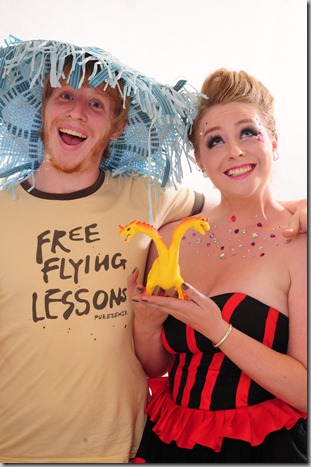 3) All English is good English. 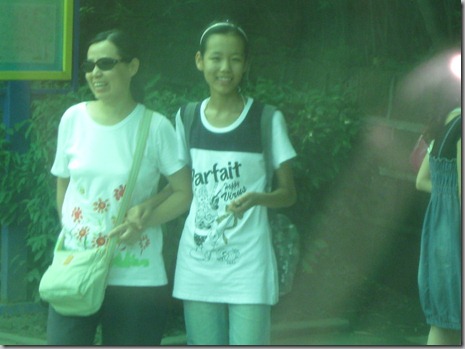 no I am not making this up. 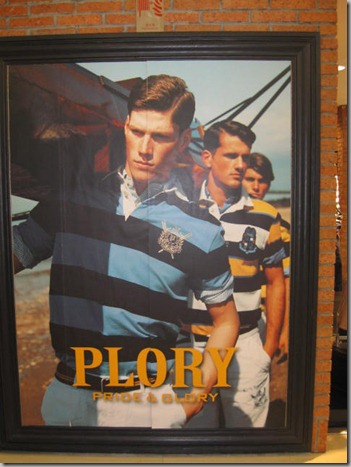 While it is true in a sense that Asian countries have a strong affinity for Western style, it is more accurate to note that as far as fashion is concerned, Chinese people just think English looks cool. Just like the Western world embraces Chinese and Japanese characters as art (Fred and I just yesterday saw a guy whose tattoo read “Shrimp Dynasty.” Whoops. ) Chinese people are far more attracted to the shape of the words than the meaning. Most of them never wonder what their shirts say, even if they speak some English. 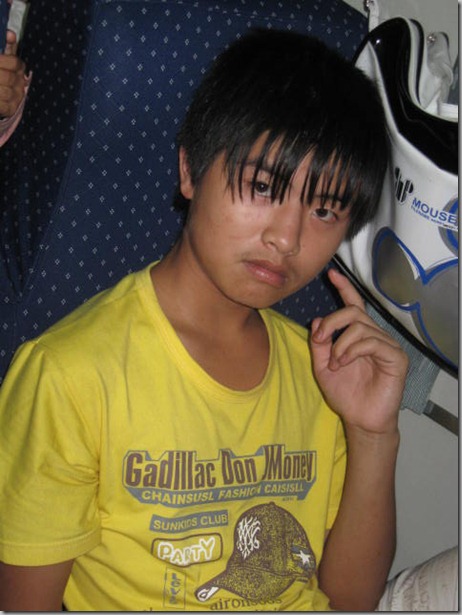 Even if you’re this bad ass.

A number of companies take advantage of this indifference to sell advertizing space on shirts. I saw a kid in Sichuan walking around wearing the McDonald’s menu printed onto his jumper. Many, many people wear the logos of gas stations or electronics.

Sometimes, shirts are printed in English espousing specific Chinese propaganda slogans. The Chinese government has perfected the dissemination of information until it is nearly a respectable art form. Minority villages have gorgeous, colorful murals covering the walls of stores and houses extolling the virtues of birth control, agriculture, and gender equality. Similarly, the government targets the relevant audience for the single child policy through a germane medium. Slogans are something that young people find extremely attractive, and the popular ones are quickly snapped up by T-shirt companies. 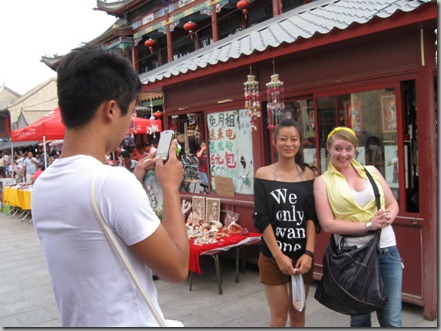 “We only want one.”  This shirt is ubiquitous throughout China. It is sold in all styles, for both men and women.

Another trend that I find equally disturbing is the dissemination of religious propaganda through clothing. China is a communist country, which means that there is absolutely no official sanction of any religion. China is also not stupid, and has no problem making a fast buck  from foreign companies interested in spreading the word. 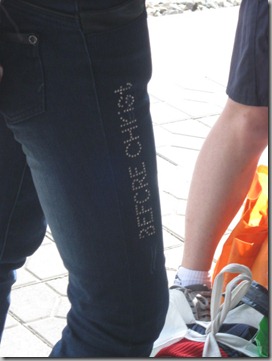 I’m not really sure what the point of writing this in rhinestones down the side of your leg is, but hey. Whatever. 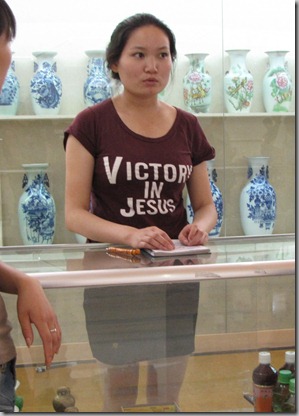 The “Victory in Jesus” shirt is EVERYWHERE. Neither of the people pictured above had ANY idea what was written on their clothes. We asked.

a) All Spanish is good English. 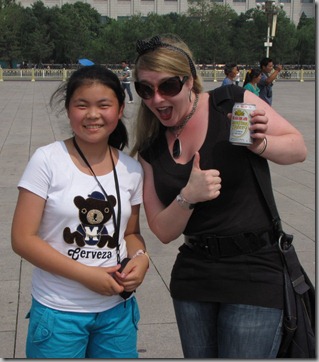 b) Even Bad English is good English 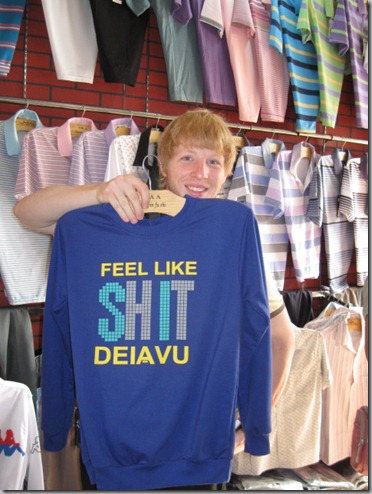 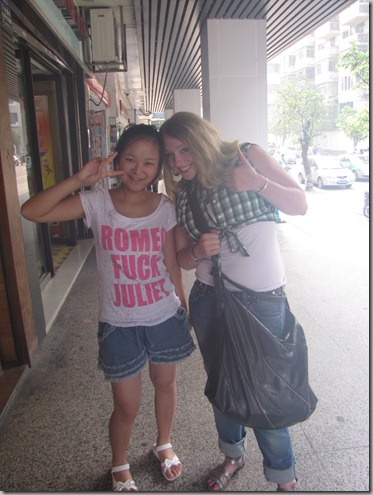 4)  (BONUS RULE!! FREE FOR YOU TODAY MY FRIEND!)Children are not people. 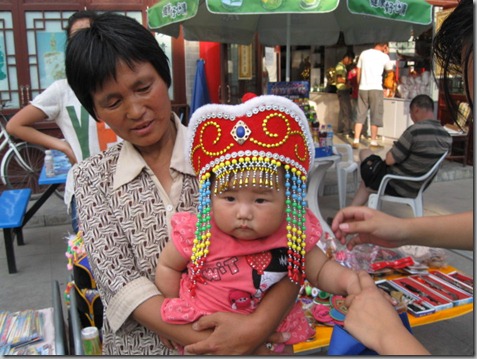 In China, your kid is pretty much fair game. You can honestly put your child in whatever the hell you want and no one will bat an eye. 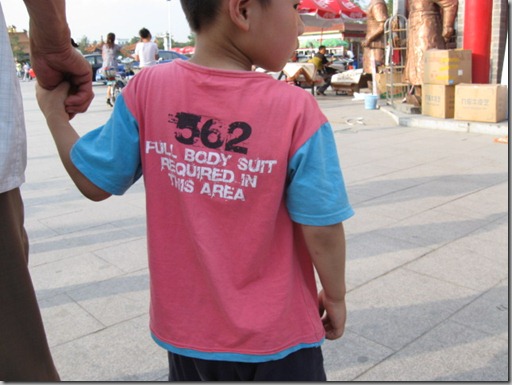 Kids are a fashion playground for parents. Clothes and image are so extremely important in China that many little girls wind up looking like Little Bo Peep, and little boys like miniature prep school ponces. 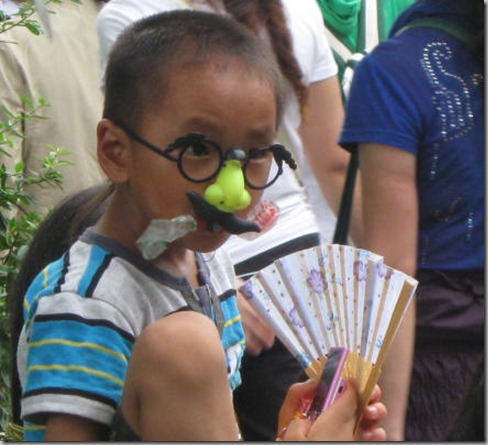 Oh, what the fuck is THIS shit?

The most appalling phenomenon I can say I’ve come across in China is the Children’s fashion industry. The forerunner for things that make me want to tear my hair are the notorious “Split Pants,” the Chinese response to pull-ups. In their favor, I can say that they are certainly efficient. And in a nation of almost one and a half BILLION PEOPLE, the toddler population alone would make a more massive disposable underwear landfill than all the pooping innocents of North America combined. So for that infamous period between “diaper” and “potty trained,” Chinese mothers simply put their children into pants with the seam split through the crotch. That way, when a child needs to use the bathroom, they simply…

And they do.  I watched a woman hoist her child over the top of the great wall to urinate.  Many children simply squat in the middle of the street. Fred and I came across a mother holding her kid above a trashcan to defecate in the middle of the forbidden city. My personal favorite came as I was washing my hands at an aluminum sink in a train car. A woman approached holding a toddler wearing a pair of pants split up the back. She held him over the windowsill, OUTSIDE OF THE TRAIN.  NEXT TO THE TOILET. WHILE THE TRAIN WAS MOVNG.  She glanced shyly at me.  "Say, 'Hello, foreign Auntie!'" she adjured the baby in a loud whisper, smiling. Urinating, the child stared dumbly. a stream of pee flowed onto the floor and pooled in the dip between the cars.  All I could do was blink. 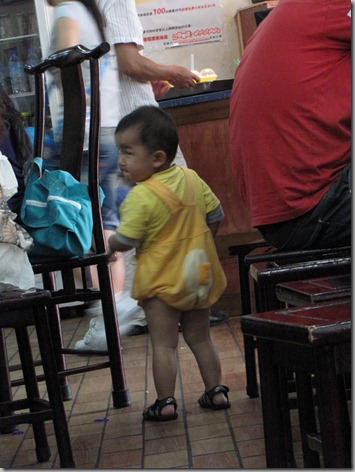 These parents obviously want their kid to grow up to be an asshole. Not only is this kid wearing a ridiculous split onsie, 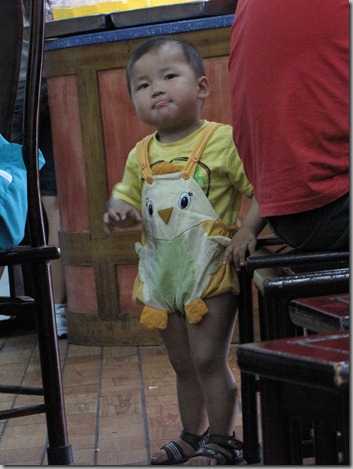 He is dressed like a FUCKING CHICKEN. Who does that to a child? WHO DOES THAT?!!?

In all fairness, though, there are things I really love about Chinese fashion. It can be daring, innovative, and extremely creative in cuts and patterns. 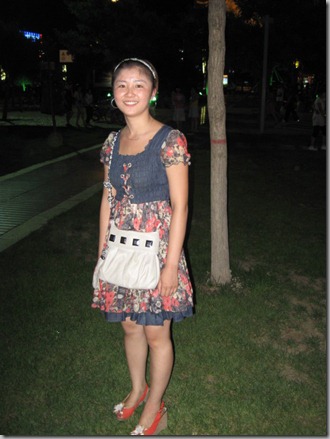 I loved this look. Every color was painstakingly coordinated, her headband matches the bows on her shoes.

Sometimes, the addition of the hat makes all the difference. 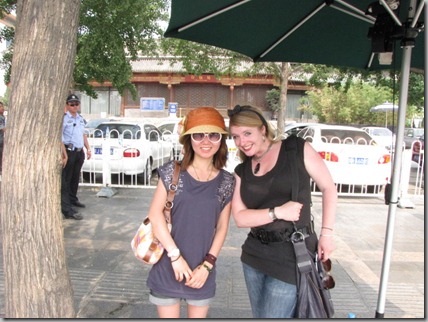 her shoes matched the hat. It was a wonder.

The rebel look has become almost entirely co-opted by  the mainstream, and this frizzed out punk rock mullet hair can be seen on old ladies and young girls alike. 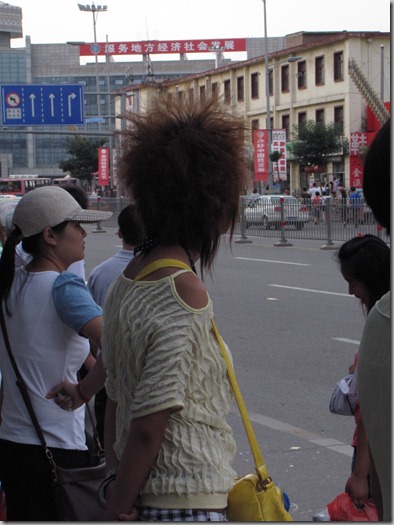 please note the conscripted adherence to the law of patterns.

Accessories form a huge part of dressing up in China. There are loads of shops that sell only vanity umbrellas, in every color and pattern imaginable. Chinese women often use umbrellas like parasols, to keep the sun off. Some of them are true works of art, some of them are just adorable. 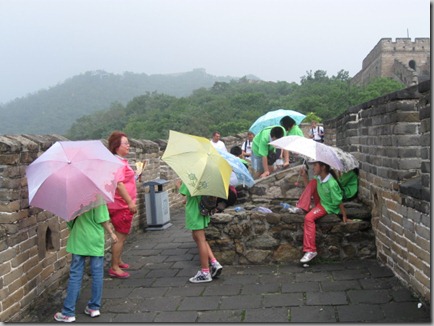 This is a fad I wish would catch on. I’m bringing home a dozen umbrellas. The hell with the “Umbrellas are for Chumps” crowd.

In closing, I leave you with a valuable lesson learned at a temple outside Beijing.

Regardless of your affinity for patterns, accessories, or sensual posturing, 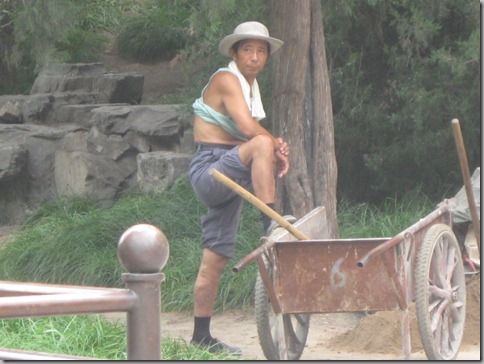 Sometimes not even a hat can save you.