Inner Mongolia is a vast, uncompromising plain, limitless and rolling, punctuated sporadically by large, dusty handfuls of neon and concrete. In fact, this is one location that lived up surprisingly well to my expectations, which is rare.

Many of China’s autonomous regions are characterized by an alternating succession of ghettoes, central cities populated predominantly by Han Chinese, and preposterously conceived minority themed tourist traps. A common opportunity at these carnivals is the prospect of dressing up in exaggerated minority costumes and posing for expensive laminated pictures. The robes are without exception garish, trimmed with gilt and fur, the inevitable  headdresses wobbly, spangled, ridiculously festooned. 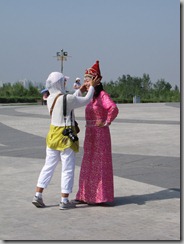 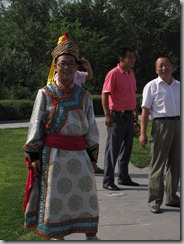 This glamorization of Minority sub-culture is typical of the prevailing Han philosophy regarding its ethnic “younger brothers,” ethnic minorities are nonthreatening, joyful, colorful, exotic and sexy. Few representations of Chinese ethnic groups include virile adult males, and instead focus on images of dancing women and children. 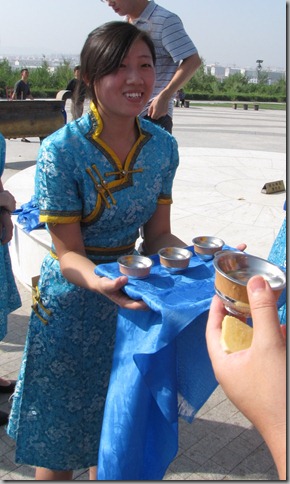 here to serve you (something that tastes god awful). 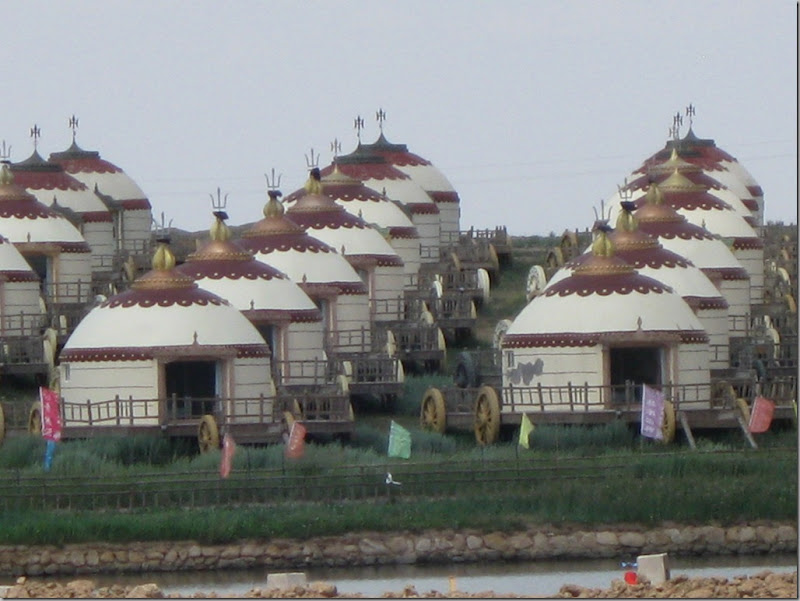 Row upon row of “yurt hotels” constructed for occupation by Han Chinese tourists. Although I actually love the fairy tale carriage look of these dwellings, they are neither traditional nor authentic. There is, actually, a karaoke bar to the right.

We decided we wanted to experience something slightly less obnoxious, something smacking less of exploitation. This dude on the train who fell asleep on Fred (the basis of many lasting friendships in Mongolia) had a good friend whose family farmed sheep in the middle of nowhere, and happened to have a couple yurts just lying around that he would be happy to rent to us for about as much money as your average hotel room.  When I mentioned we wanted something with less exploitation, obviously I was not referring to the reciprocal. At least we wouldn’t be living in a school of excitable vacationing Beijing tourists getting plastered on Heineken and photographing the waitress. 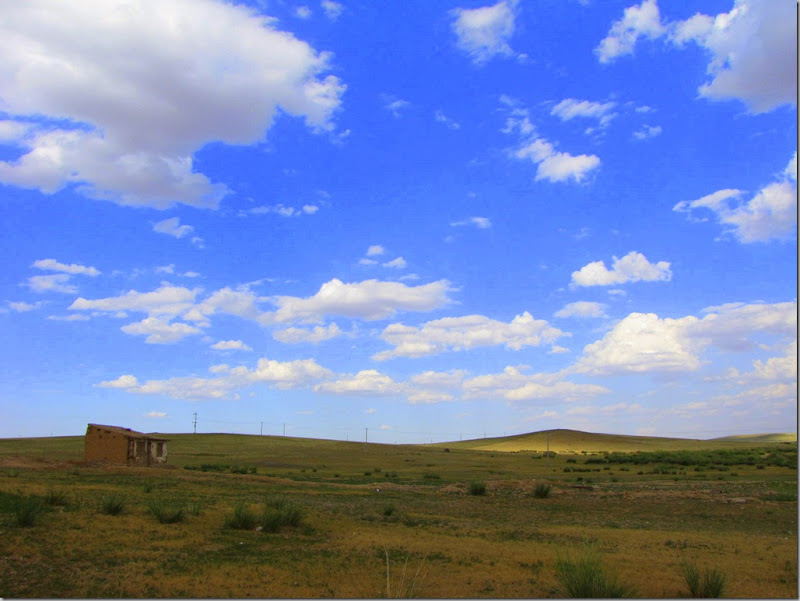 The plain stretched for an eternity, broken by deteriorating mud shacks and the occasional telephone pole. The family lives in a long mud house with four rooms end to end, which they share with another family. And about 50 sheep. Our hostess looked truly alarmed when I asked about a bathroom. Gesturing helplessly, she said, “just find a place where nobody is.” 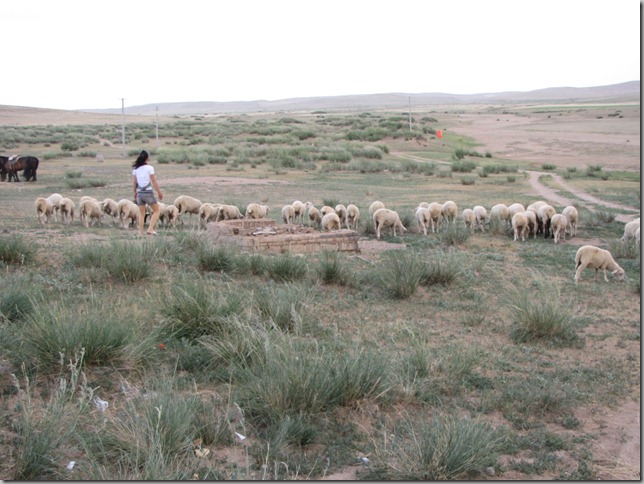 Our yurt was a beauty; perched on a platform at the base of a dry slope and surrounded by smooth stepping stones and sand, it rose solidly, if not majestically, from a scrubby field of still dry grass. The sides were made of sheets inside and thick canvas outside, both of which could be rolled up and pinned to allow for air circulation during the suffocating heat of the day, and pinned down to keep  various nocturnal intruders out (or in, as the case may be). The inside is composed of two distinct sections. The entrance comprehends about a quarter of the circular tent, floored in smooth concrete, affording you plenty of room to remove your dusty shoes. The rest of the tent is a raised padded platform with a small table, where you both eat and sleep. 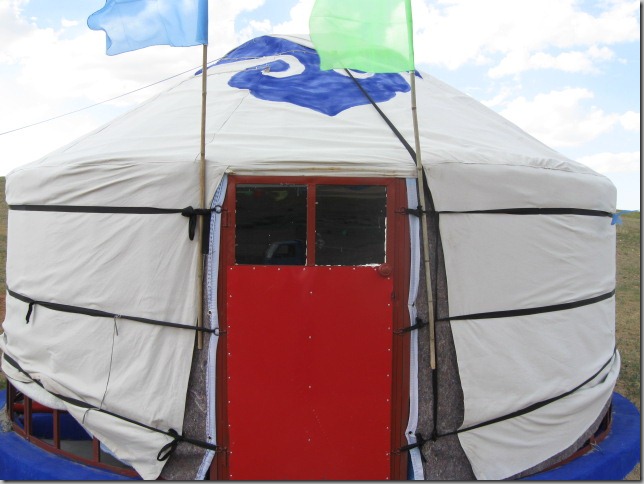 Established in our new home, we were served a traditional Mongolian meal, which was about three pounds of boiled mutton and hot water to drink. We were also treated to a taste of traditional Mongolian “fermented horse milk wine,” which, from the taste, renders it impossible to determine which region of the horse produced it. 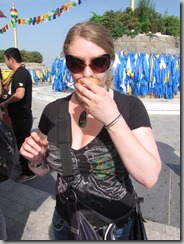 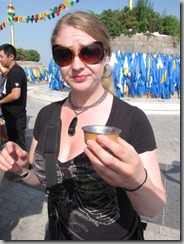 No one claimed Mongolia was renowned for their cuisine.

During the golden age of Mongolia, when Kubla Khan’s hordes were conquering everything from Korea to Germany, long distance messengers and warriors on urgent missions would remain on horseback for weeks on end, subsiding on blood sucked from small wounds they would incise on their horses’ necks. From such roots do not grow a forest of culinary delights. We sucked it up and gnawed meekly at our greasy fare. 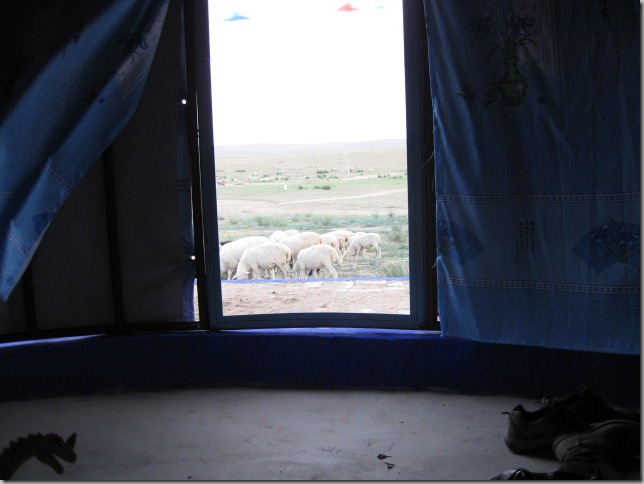 There’s probably something ironic and obscene about watching your dinner eat dinner while you’re eating dinner, but I don’t want to talk about it.

After dinner, we sat on the stoop outside our yurt and watched the horizon deepen in hue as the sun sank. The brief, soft breeze whistled eerily over the tops of our beer bottles. The steppe is silent, hot and dry, rasped by the circuitous progressions of enormous grasshoppers that alternately sputter like the engine of a Qing dynasty jalopy and click; loudly, arhythmically, strangely.

We rented some horses from our host and rode out into the grasslands as the sun set. 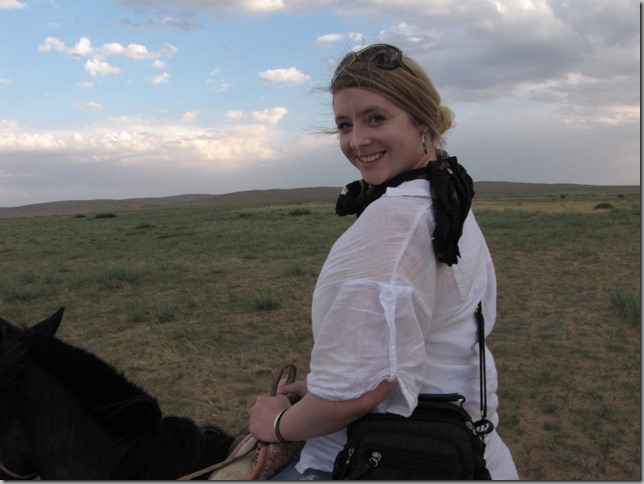 The endlessness of the plains is daunting; it’s inexplicable to me that a people with seemingly endless horizons could ever be motivated to conceive of lands farther away, let alone disseminate themselves so viciously and effectively. It’s difficult to imagine being anything other than phlegmatic and indolent on a diet of six pounds of boiled mutton a day and nothing to look at. Then again, we only stayed one night. It’s distinctly possible that by the end of a week, I would have developed a host of horde-like symptoms and massacred Fred and all the sheep.

Our inability to manufacture any violent tendencies or original thought made it difficult to extol the country the way it deserved, and we failed to write a new anthem about inner Mongolia, owing to the profound absence of any majestic purple mountains or amber waves of anything, which just goes to show how poorly equipped our national anthem is for adaptation to other countries.  “Above the dearthful plain” doesn’t quite have the desired ring to it. Also the spell check informs me that “dearthful” does not yet appear to be a word, so I suppose that even in our post-prandial meat stupor we invented something.

The night was inky black, the smell of the yurt a musty, grassy odor mingled with the oily scent of mutton, leather and sunscreen. The insects did not subside, and the moon shone like high beams through the circular aperture of the conical ceiling.  We fell into strange sleep, the steppe lulling us with the soft murmurs of sleeping sheep and the alien applause of the grasshoppers. 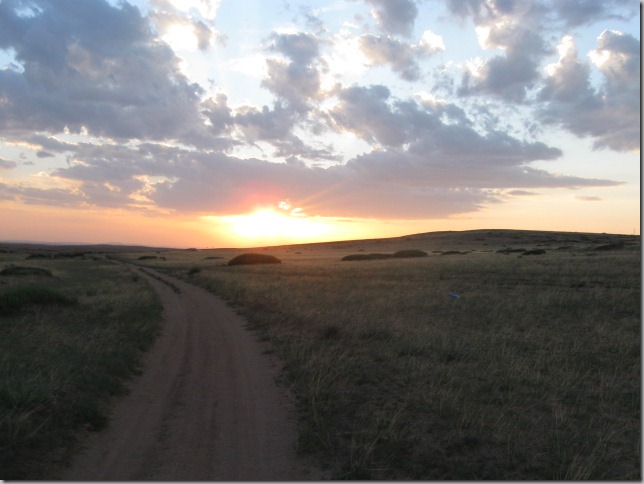