I learned all kinds of Spanish phrases for this trip so that for once I could just buy a damn soda without feeling like a jerk. From my past experiences in foreign environments, I have come to appreciate the value of short sentences like "Is this really where I take a bath?" and "I've never had a massage in a trunk before." Since this vacation is nearly two thirds of the way complete, and I have not yet had any run-ins with the authorities, it might be safe to say that all that Spanish I practiced was a waste of time. In all honesty, everyone who speaks even a little English is so ecstatic to use it on a real live person who sucks at speaking Spanish that you don't even have an opportunity to embarrass yourself. People get really excited to talk to tourists.

Today, we stopped at a tiny store on the side of a mountain road to buy a drink. a man covered in paint swung himself bodily off his bright yellow motorcycle and howled, "Hey, LADY! How ARE YA?!!?" And then stood there, grinning, brimming with pride. (N.B. He did not really care how I was.) Everyone wants to talk to you. The first thing that struck me about Puerto Rico was how truly anxious everyone is that we like Puerto Rico. The man sharing our row on the flight in drew us maps, and gave us his home phone number. Our first night in San Juan, a couple approached us in a restaurant to tell us about all their favorite places on the island, and to give us tips about rental cars and the best places to eat and drink. We later ran into them at a bar, and they invited us to a birthday party and gave us their cell numbers. "Call if you need help! Call if you have questions!" Most strangers that have exchanged even a "good morning" with us have later handed us a slip of paper or a business card with a number, a map, an invitation to dinner. What astonishes me is that in the hundreds of interpersonal exchanges we've had over the past week and a half, we have yet to encounter a single person who has been rude, or disingenuous, or unkind. This is saying something on a tiny island housing over 4 million people. Holy Frijoles.

We started our trip when we flew into San Juan, the largest city on the island. We spent the first few days wandering around Old San Juan, a sector so lovely, exciting and delicious that it deserves its own post. I am looking forward to our last few days on the island, which will give us a chance to explore the city a little better. My ultimate goal is the botanical gardens, 75 acres comprehending a lotus lagoon and a wide variety of orchids.

This trip didn't get off to a particularly auspicious start, since within a few hours of touching down I developed a high fever and a sinus infection. We rented a car and drove East, pursuant to our original intention of driving around the island on the coastal highways. Mike drove, and I slumped over in the front seat, muttering. In case you are considering developing a malady and then depending on Mike for a tour of anything, here I will include some actual dialogue as a testimonial to his eminent qualifications in that capacity.

Me: Wow, that looks really pretty! What is that?

(Later) Me: Hey, did you see that building? It was beautiful! What did that sign say?

Mike: It's the Guayama meat packing plant. The dome is where they slaughter the chickens, because it's more space efficient.

We made it to the middle of the south coast before stopping for the night. After the gorgeous hotel rooms in Old San Juan, the Marina hotel we found was dispiriting in its ugliness, and the short walk we took around the neighborhood around sunset did very little to dispel the gloom inspired by the dark rooms and stagnant pools of water in the parking lot. Playa Salinas, which means "saltworks beach" is not a misnomer. This place is all salinas and no playa. In point of fact, the only beach visible was a dank spit of unwholesome silt barricaded by a thorny entanglement of dead branches, housing a rotting skiff and a nation of gigantic centipedes. The night is shattered by the shrieks of drunken maniacs and the soprano squeal of the same drunken maniacs peeling out in what sound like power wheels. Salinas is a place to go if you want to relax in a damp hotel room with rubber sheets (P.S. what the fuck) wondering what a ferreteria sells. (hint: not exciting.)

From this veritable beachfront gem we drove North into the central mountain range to the village of stalls and kiosks that comprise the town of Guavate. Guavate is considered the authoritative epicenter of true Puerto Rican cuisine, which as far as I can tell is mainly blood sausage and Coca Cola. But one thing they do often, and do to perfection, is suckling pig. Every weekend, people flock here in droves to experience the punishing heat, the billions of cheap plastic toys, the accelerated speeches of the hawkers, and the adolescents rapping awkwardly into low quality microphones over canned beats cribbed from Salsa standards. They come for the pig. I would do it all again for the fruit shakes. 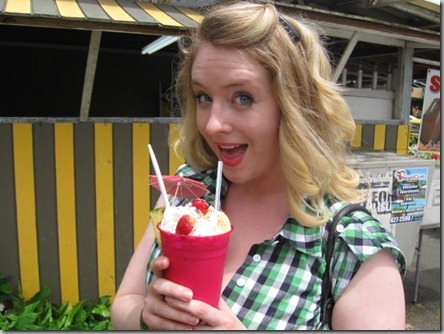 After we had experienced the pig, we drove southwest through small, erratic mountain roads to reach the town of Ponce, which lacks the distinction of being Puerto Rico's second biggest city.

Ponce is a ghost town surrounding a bustling city block. The center of town is a highly manicured plaza sporting the Parque de Bombas, a severely wacky structure in variegated blocks of black and red; 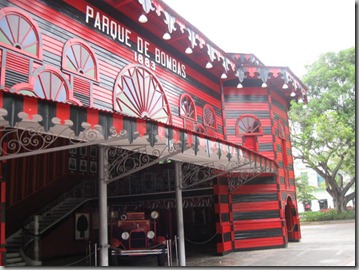 you can’t touch the car. 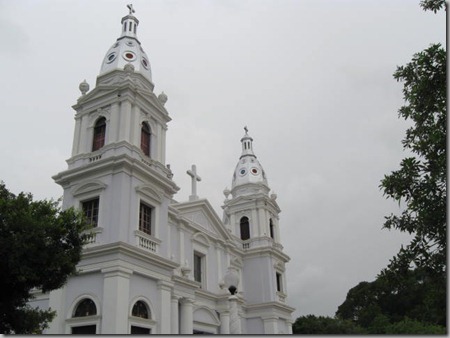 In the time it took you to read this caption, four tasteful weddings were performed.

and the Fuente de Leones, which sends jets of water shooting blithely into the thick air. The buildings immediately surrounding the plaza are immaculate and breathtaking, 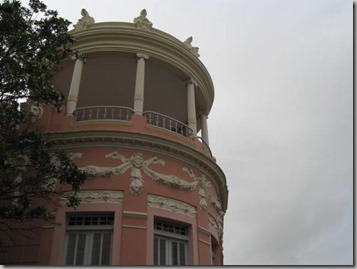 and our hotel (Melia) was exquisitely maintained and beautifully decorated. However, nearly all the restaurants reviewed in our travel guide (published about a year an a half ago) had gone out of business, leaving empty storefronts or dimly lit interiors filled with soggy boxes. The farther away from the center you venture, the more obvious and aggressive the dissolution. 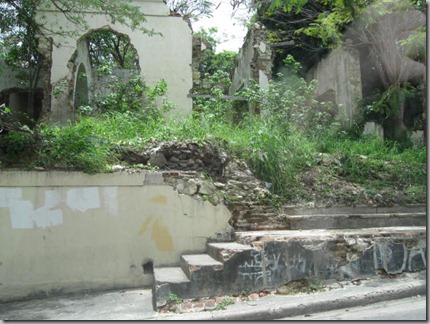 The French colonial style buildings are all in various stages of disrepair and decay, some of the most striking examples falling into rubble right next to freshly painted bright houses, the gaunt faces of squatters peering with jaundiced squints through the uniform blinds of the newly remodeled Ramada Inn. If you pursue the maze of infuriating one way streets and the snarl of decrepitude and poverty, you will (hopefully) arrive at Ponce's most significant tourist attraction: an enormous, hollow cross made of concrete and fiberglass perched stolidly at the peak of the hill overlooking the town. Directly below the cross is the Castillo Serralles, a lavish mansion built by early proceeds of Puerto Rican Rum. Slightly above the cross is the mouldering wreckage of the once splendid Grand International Hotel. We drove up to the rusted gates for a better look. Inside the torn barbed wire, beyond the fragmentary fence, things rustle. As charming as the pictures would have been , we did not stick around to be murdered by the kind of desperate vagabond who would smoke the product of oven cleaner sprayed through the carburetor of an overheated Camero. Tacoma has made us wise.

Ponce is a series of provoking contradictions that leaves the visitor unnerved and unsatisfied; a town that is in all its partially refurbished glory boasts a monument to the splendors of the past, yet many of the region's most historically significant buildings are crumbling to dust, housing the cities' burgeoning drug crisis and breeding vermin in its ruins. Of all the metaphors encountered so far on this trip, Ponce is the most unsubtle and the least profound. 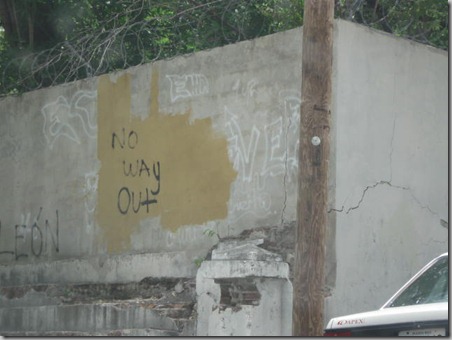 All pseudo Victorian harbingers of disaster aside, we're having a wonderful time. Puerto Rico is beautiful, the people are marvelous, and the views are breathtaking. The drivers are the worst in the world, and people tend to be surprisingly lackadaisical about answering phones, staying in lanes, and moving their livestock out of your way. In a way, it's kind of a relief to worry less about time, and speed, and efficiency, even if it means we have to sit at a stop sign and wait while a guy named Nelson teaches his horse not to shy at stray dogs. Maybe even then. At least he asked us to dinner.

Email ThisBlogThis!Share to TwitterShare to FacebookShare to Pinterest
Labels: Travel